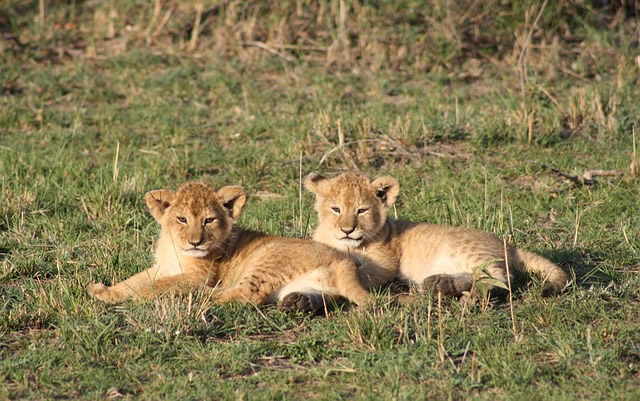 Two twin cubs were born on Christmas day at the Uganda Wildlife Education Center (UWEC) also known as Entebbe Zoo. According to the spokesperson of UWEC, Mr. Eric Ntalubwa, “the cubs were born in the wee hours of Christmas Day”.

The cubs were birthed a lioness known as Mutagamba, who was named after Uganda’s former Minister of Tourism and Antiquities, the late Maria Mutagamba. “Mutagamba has proved to be a good mother and she is looking after the cubs”, said Ntalubwa.

Mr. Ntalubwa added that this is the second litter for Mutagamba who is seven years old, her first litter came two years ago and included three cubs namely; Zuri, Paradise, and Africa. All the 3 are still alive and doing well in the zoo while the latest birth brings the total number of lions at the zoo to 9.

The father of the cubs is the late Letaba who passed on after a road accident early this year. Mutagamba was born to 13-year-old Biesa and fathered by the famous late Kibonge. The gender of the two cubs has not yet been established because their mother has denied both the caregivers and vets access to them.

“We cannot tell the sex because the mother is very protective and does not allow intrusion,” said Ntalubwa, adding that the cubs are vulnerable and are protected by the lionesses.

“They will hide their cubs for six to eight weeks. Although the cubs are still in seclusion, they are playful and are treating the patrons at Wildlife Education Center to noises,” he said, adding that they will be unveiled to the public in the next two months after approval by the vets.

Dr. James Musinguzi, the Executive Director of UWEC said this was the first time animals at the center had produced on Christmas day. “This is a Christmas gift for us at the center and the conservation fraternity,” he said.

Dr Musinguzi says that the cubs will be named Emmanuel and Manuela along with other names depending on their gender since they were born on Christmas day. Traditionally, the names given to animals here depend on circumstances through which they were born while some are named after personalities and sponsors.

“At the moment, we haven’t yet established their sexes, we respect the natural instincts of the mother and we cannot remove the cubs for the sake of determining their sex,” he said.

As the number of lions in the protected areas continues to decline, Dr Musinguzi says that there is a plan they are working on with the Uganda Wildlife Authority (UWA) to reintroduce some into the wild. However, he says that this will be done following the guidelines of the International Union for the Conservation of Nature (IUCN).

Quick facts about lions in Uganda

The life expectancy of lions in the wild is 15 years while that of those in captivity is 20 years. Lions in captivity (UWEC) live longer because they get food and medical care while in the wild they have to work hard for food and sometimes fall sick.

Lions start siring offspring at 3 years while the females start at two-and-half years and the cubs start hunting at four months. The population of lions in Uganda is about 400-450.

UWEC also known as Entebbe zoo is located at Entebbe along the northern shores of Lake Victoria, 40 km South of the capital Kampala. UWEC is the largest zoo in Uganda with over 100 species of animals and plants.

There are both large and small animals in the zoo including lion, elephant, hyena, leopard, antelopes, chimps, several species of birds and snakes, among others.

Both the animal and plant species in the zoo are kept mainly for conservation, research and study purposes. Several visitors including students regularly visit the zoo to see and study about the animals while wildlife researchers also visit the place to study both plants and animals.