Explore the magical Rwenzori Mountain up to Margherita Peak

Mountain hiking safaris are not so common in Uganda but the presence of Mount Rwenzori also known as the “Mountains of the Moon” with its beautiful snow-caped peak of Margherita at 5,109 meters above sea level is increasingly attracting more adventure-loving tourists. 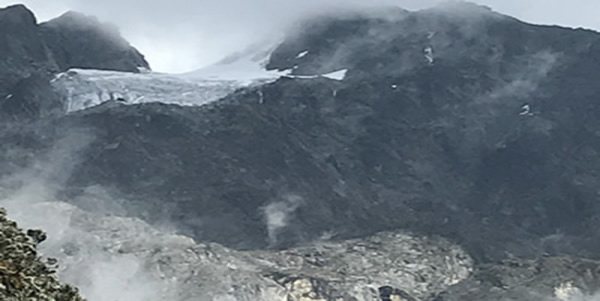 Majority of the travelers who visit Rwenzori national park are targeting to hike and reach the Margherita Peak though the beautiful scenery that features glaciers, waterfalls, and lakes also makes the place more attractive to visitors.

The mountain has got stunning views of glaciers and the snow-caped peaks lying just a few kilometers from the Equator and this is also complemented by its many natural habitats of endangered species of flora and fauna including the giant heather.

The glaciers of the Rwenzori are the highest and most permanent source of the River Nile and also give birth to a multitude of fast-flowing rivers and waterfalls. In addition to this, the stratified vegetation along the its slopes and the several animal species that inhabit it make Rwenzori exceptionally scenic and beautiful.

The unique alpine flora of the Rwenzori includes several species of which some are endemic to the Albertine Rift for example the giant heathers, groundsels and lobelias that occupy the altitude zones. The community around the park also benefits from its various wild resources and it is also a vital cultural heritage for them.

Rwenzori national park, established in 1991, occupies an area of about 1,000 sq. km and its most notable features include Margherita, the third-highest peak on the continent, waterfalls, glaciers, and, rivers and lakes. 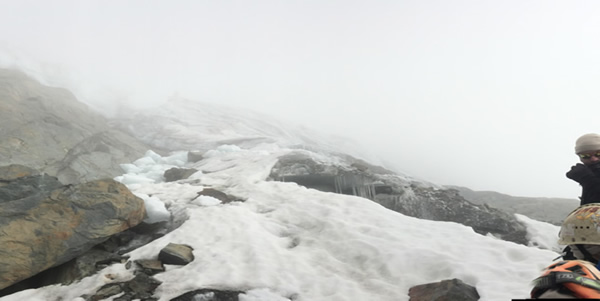 Trekkers that hike to the top of the Rwenzori go through various vegetation zones ranging from tropical rainforests to alpine meadows to the snow zone. Each vegetation is inhabited by different species of flora and fauna including the giant groundsel, lobelia, tall heather covered in moss on one of the peaks. 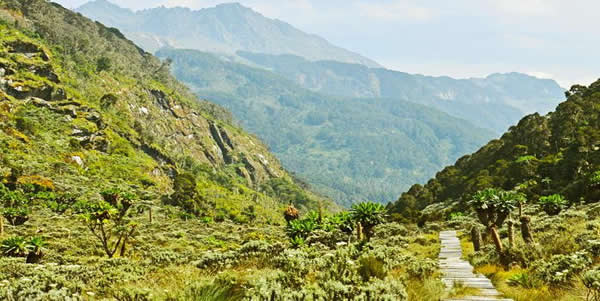 The montane vegetation zone of Rwenzori lies between 1800-2500 meters above sea level. It is characterized with moderate trees and a broken forest canopy. The common trees in this zone include red stinkwood, the yellow-wood tree, pordocarpus, symphonia globulifera, milanjinus, wild bananas, begonia, among others.

This zone lies between 2500-3000 meters in the good soils along the gentle slopes. The thick litter of bamboo leaves always cover the ground producing more nutrients on decaying. As you approach the steep and rocky slopes, bamboo is gradually replaced by tangled undergrowth. The bamboo zone has also got a giant lobelia, and lobelia gibberoa that grows in the wet and swampy areas of this zone. Other tree species that grow in the bamboo zone include hagenia abyssinica, podocarpus milanjianus, dombeya, afrocrania, among others.

The heather zone lies between 3,000-4,000 meters, an area with poor soils encouraging the growth of heather forest on ridge tops, rocky and moderately boggy places. Thick Sphagnum moss in this zone cover the tree stems while branches are draped in Usnea beard lichens. Common plants in the heather zone include Disa stairsii, the coral pink ground orchid, and impatiens runsorrenis. Valleys are covered with huge bogs that are mixed with carex runsorrensis that grows in the tussocks. There is mixed woodland with small shrubby trees in well-drained slopes whereas Groundsel trees and lobelias are also found in this zone. Moss and everlasting flowers form the undergrowth in this zone. 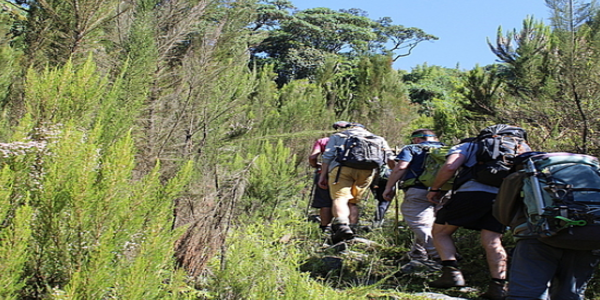 Treks to hike Rwenzori are done through the various trails available in the park that include the following;

The central circuit trail, this is the oldest trail in the park and a more traditional one that is considered less challenging compared to others. Other trails of Rwenzori national park include Kilembe trail, Mahoma trail, Rwenzori Mountains Cultural Trail, and Bulemba Ihandiro Cultural Trail.