Few animals have sparked the imagination of man as much as the gorilla, the largest of the living primates. Most gorillas live in inaccessible regions in various dense forests in tropical Africa, and one subspecies, the mountain gorilla (Gorilla beringei beringei),was not even known to science until 1902. The mountain gorilla has a robust build with long, muscular arms, a massive chest, and broad hands and feet. It is the hairiest race of gorillas; its long, thick black hair insulates it from the cold of living at high elevations.

Behavior
Although strong and powerful, gorillas are generally gentle and shy. They live in groups of 2-40 individuals, averaging about 11. A dominant male, the silverback, named for the silvery gray hairs that grow when the male matures, leads groups. The silverback serves as the chief leader and protector of the group, to whom all group members defer. He decides when and where to forage, rest and sleep, arbitrates disputes among his family members and protects them from rival 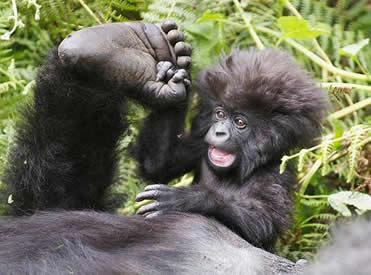 silverbacks or human predators. Mountain gorillas have a slow rate of reproduction. This slow reproduction makes this species even more threatened. In a 40-50 year lifetime, a female might have only 2-6 living offspring. Females give birth for the first time at about age 10 and will have offspring every four years or more. A male reaches sexual maturity between 10 and 12 years. Able to conceive for only about three days each month, the female produces a single young and in rare cases twins.
Newborn gorillas are weak and tiny, weighing about 4 pounds. Their movements are as awkward as those of human infants, but their development is roughly twice as fast. At 3 or 4 months, the gorilla infant can sit upright and can stand with support soon after. It suckles regularly for about a year and is gradually weaned at about 3.5 years, when it becomes more independent.
Diet
It is perhaps surprising that an animal as large and strong as the mountain gorilla is primarily an herbivore. Mountain gorillas eat over 100 different species of plants. They rarely need to drink since their diet is so rich in succulent herbs, from which they get their water.

Predators and Threats
The primary threat to mountain gorillas comes from forest clearance and degradation, as the region’s growing human population struggles to eke out a living. The African Wildlife Foundation (AWF), in collaboration with Fauna and Flora International and World Wide Fund for Nature, established the International Gorilla Conservation Program (IGCP) to safeguard the last remaining mountain gorillas.
IGCP works on three levels: Strengthening gorilla habitat protection through regional collaboration, researching the dynamic between the human population and the natural habitat/wildlife, and working with local communities to develop livelihood strategies that are complementary to conservation objectives.
This coalition has been a tremendous success, but support is still greatly needed. The most endangered of the gorilla subspecies, only about 720 mountain gorillas remain in the wild.
Quick Facts About Mountain Gorillas
There are only about 1004 mountain gorillas left in the world.
Humans and gorillas are 98% genetically identical.
Male silverback gorillas can weigh 50-100 pounds more – and are about 10 times stronger – than the biggest American football players.
When the group is attacked by humans, leopards, or other gorillas, the silverback will protect them even at the cost of his own life.
Mountain gorillas are endangered species, which reside in the rain forests of Bwindi forest, Mgahinga gorilla, Volcanoes and Virunga national parks in Uganda, Rwanda and Congo respectively. The human like characters of mountain gorillas make gorillas a must visit creatures on your African Safari.