Amazing facts about the gorilla body

Gorillas have got so many amazing facts ranging from them sharing up to 98 percent of the human DNA to living in social groups that are headed by dominant males known as silverbacks. However, like humans, it seems that there are many more facts about these elusive and giant primates that cannot be exhausted. With the experiment of mountain gorillas found in the Virunga Mountains of Rwanda, Uganda, and DR Congo, we uncover more amazing facts about these great primates.

Today we take a closer look at a gorilla anatomy, with a deeper focus on the structure of the body of a gorilla to discover the amazing and unique features that very few people take note of even after being close to them. 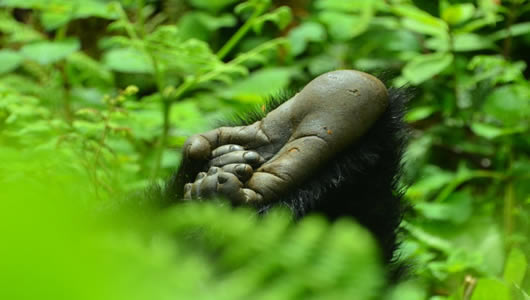 Just like most primates, gorillas too have opposable thumbs on their hands and surprisingly they also have semi-opposable feet! Compared to humans, the gorilla’s big toe is longer and placed lower on the foot coupled with the its flexibility to help the ape in grasping and climbing activity associated with their daily lives. This aspect is compares with humans’ shorter, forward-facing big toes that provide pushing power for walking.

Fact 2: Gorilla bones are much denser than those of humans

This fact is a proof to the gorilla’s average weight of 300-450 Ibs which is much higher than the average weight of humans. The heavier weight is as a result of apes having a high density of spongy bone which is not the case with humans. The absence of spongy bones in humans explains the high rate of breaks and fractures in humans compared to the apes. On the other hand, the great weight also makes the non-human great apes less flexible rendering them unable to swim.

Fact 3: Gorillas have a significant “brow ridge” above their eyes 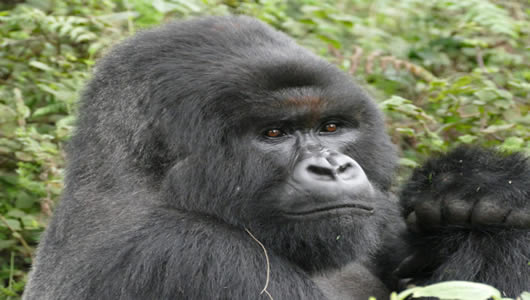 This is also a common feature among other great apes apart from modern humans who rather have a curved, unpronounced brow ridge. For gorillas, their brow ridges are continuous and straight, and stick out over their eyes. Studies indicate that a large, sturdy ridge of a gorilla helps to support the weaker skull bones and also reduces strain on the skull when the animal is chewing some hard food items like nuts. Although it is commonly referred to as the “brow ridge” this part of the skull is actually called ‘supraorbital ridge’, which literally means ‘ridge above the eye.’

Fact 4: Gorillas have a longer arm length to height ratio than humans 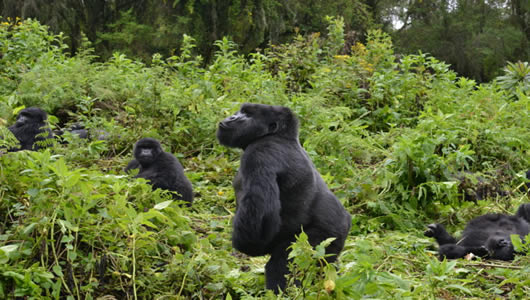 Unlike humans who have an equal arm to height ratio (meaning an individual’s height is equal to the length of their arm span), gorillas have a longer arm length to height to their height ratio. When gorillas do stand bipedally, they measure about 6 feet tall while their arm span averages about 8 feet. This unique anatomy feature among gorillas suits their quadrupedal movement and also helps them with climbing.

Fact 5: Gorillas have a bigger head than humans but a smaller brain!

This should be less amazing considering the facts. While there is no doubt that gorillas have larger skulls than humans, the latter have got much more room in their skulls to accommodate for their brains. The average amount of space for a brain in humans (cranial capacity) is about 1325 cubic centimeters while gorillas have got only 500 cc’s. This indicates that the actual brain of gorillas on average is just 0ne-theird the size of human brains while the reduced cranial capacity of gorillas is attributed to the difference in the shape of the skull.

Whereas the area underneath the human mouth sticks out and away from the skull, the same area on gorillas slopes back towards the skull. More surprisingly, researchers indicate that humans are the only animals with a bony protrusion beneath their mouths which is commonly known as a chin and the reason for this is yet to be established.